The easiest way to understand anything is with the help of maps and charts. Not only do maps help us make things look simple, visualization also helps us remember those things for longer periods of time. Have you ever wondered how many billionaires there are in the world, or how many prisoners there are for every 100,000 inhabitants? Well, we have gathered some interesting maps and charts that shows us facts, stories, and even answers to interesting questions that will change the way you see the world.

1. The United States is so big that its states are the size of countries.

United States is the fourth-largest country in the world by area (3.797 million mi²). Despite challenges, the U.S. economy is still the largest in the world. In order to put the sheer size of the country into perspective, Connecticut has a total area of 5,543 mi², which is also the same size of Bahamas, East Timor, Falkland Islands, Fiji, Gambia (The), Jamaica, Kuwait, Lebanon, Nagorno-Karabakh Republic, Qatar, Swaziland or Vanuatu. California, on the other hand, is 163,696 mi², which is roughly as large as Iraq, 168,754 mi². Arizona has a surface area of 113,998 mi², which is as large as the Philippines, 115,831 mi². Although there are many countries that are considered massive in size, the map puts things into perspective.

3. There are more people living inside this circle than outside of it.

It might be surprising to see that a small circle contains more people living inside of it than outside. Within the circle contains all or most of the world’s most populous countries: China, India, Indonesia (fourth), Pakistan (sixth), Bangladesh (seventh) and Japan (tenth). According to the World Population Prospects 2017, the world population is expected to be 9.8 billion by 2050 and almost 12 billion by 2100. Currently, China has 1.386 billion inhabitants and India has 1.339 billion. These two countries alone are the two most populous countries in the world and according to a new report, the population of India is expected to surpass China by 2024. (source)

4. Africa is much bigger than you think. It is as big as the USA, China, India and Europe—combined! 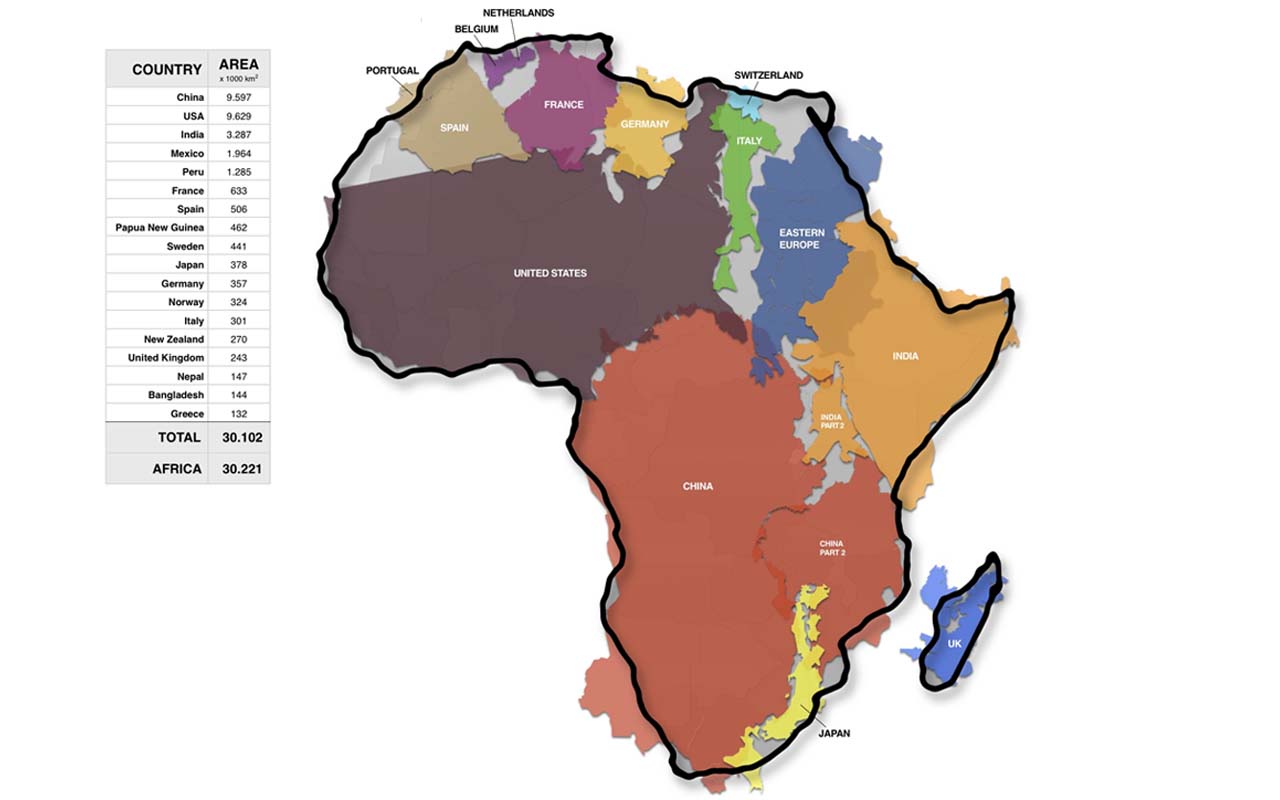 Many consider Africa to be a small continent but the truth is, the continent, with over 50 independent countries, is as big as 13 nations and Eastern Europe combined. With a surface area of 11.73 million mi², the continent is usually underestimated in maps but in reality, Africa is bigger than China, India, the contiguous U.S. and most of Europe—combined!

5. Much of America is uninhabited.

A Block is the smallest area unit used by the U.S. Census Bureau for tabulating statistics. Considering the country in Blocks, the data shows that 4,871,270 blocks totaling 4.61 million square kilometers is actually uninhabited. Despite having a population of 327.2 million, 47% of the USA remains unoccupied. In the map above, the green shades represent the unoccupied Census Blocks. This means that, the parts of the US with green Blocks are either uninhabitable, perhaps because they are covered by lakes, swamps or rivers, or has laws forbidding people from living there, such as national parks or conservation area, or is an industrial zone where people work but no one actually lives.

Currently, our planet is home to more than 7.7 billion people. According to the World Population Clock (WPC), the current population growth rate is 1.07% per year, with an average population increase estimated to be more than 82 million people per year. WPC also notes that within the past few decades, the only continent that shows negative growth rates are Southern Europe and Eastern Europe while all of the regions of Africa show significant population growth rates. The population of Africa grew from 817,566,004, to 1.216 billion by 2018. According to Worldometers, the world population will grow to 8.5 billion in 2030 and to 9.7 billion in 2050. (source)

7. You are wealthier than you imagine yourself to be.

Of course most of us are not rich and would consider ourselves as working middle class, living paycheck to paycheck. Although we are struggling to survive every day, if we take a look at our annual income, we would qualify for the global elite. A person who makes an average income of $27,500 a year, is among the top 1.7%. Using the same math, if a person makes an average salary of $43,000 per year, they are among the 0.47% richest people in the world who make at least $22.40 per hour. This might not be enough to live in cities such as New York, but according to the Global Rich List, an average Ethiopian factory worker makes $0.23 working the same time.

8. The percentage of a country’s population that are literate.

Air pollution poses a greater risk for humans than anything else. Within the past few decades, we have seen a significant rise in air pollution, with China and India being the top polluting countries in the world. While there are many ways to measure air pollution, a key indicator is called “PM 2.5” — one of the most harmful classes of airborne pollutants. The “PM” stands for “particulate matter,” and the “2.5” stands for 2.5 microns in diameter or smaller. Such pollution can cause long-term health problems like asthma and chronic lung disease. If the PM 2.5 levels go above roughly 35 micrograms per cubic meter of air, it poses an even greater risk.

China, which is the world’s most populated country, is also the world’s most polluted country. More than five provinces in China emit more carbon dioxide than any other country in the world. At the same time, WHO reports that fourteen out of fifteen most contaminated cities are in India. According to CNN, breathing air in New Delhi, India’s capital, is equivalent to smoking 44 cigarettes a day. (source)

10. All the places in our planet where rats live.

Rats are invasive species that manage to survive in almost all conditions. They are highly intelligent and threaten our eco-system by feeding on stored foods and spreading diseases. Scientists have managed to find 64 species of rats worldwide. The highly intelligent creatures have managed to invade almost all of our planet, yet, there are actually places untouched by the invasive rodents. The blue spot in Canada is an area in Alberta, where effective pest control was taken. For more than a century, Alberta has successfully kept rats from taking hold of an area larger than France, and is the largest rat-free inhabited area on Earth. Antarctica, the coldest, windiest, and most isolated continent on Earth, is also free of rats. Also, the rodent control measures taken in Alberta prevents anyone from bringing in pet rats. Not only will officials seize the rodent, but will also force the offender to pay fines of up to $5,000 for harboring the rodent. (source)

Previous 11 Amazing Facts That Will Make You Say “What the…?”
Next 11 Foods That Look Completely Different In America Compared To Other Countries