Since technology has become more reliable and efficient, people have forgotten tips and tricks from the past. Sometimes, a solution to a problem might not be the latest innovation. Our ancestors followed certain tricks that helped them with their daily lives. Thanks to the New York Public Library, the “how to do it” cards found in cigarette boxes are digitized. These life hacks, followed more than 110 years ago, are something millennials might want to take note of.

During the 1900’s, cigarette cards were popular. They displayed a series of ads, celebrity photos and much more. These were often done to promote the brand and boost the sales. Gallaher cigarettes, a UK-founded tobacco company, was one of the largest in the world at the time. The company decided to print a series of helpful how-to’s on their cards, that ranged from removing a splinter in a matter of seconds to stopping a runaway horse with ease. The company even printed DIY’s; such as how to build your own fire extinguisher at home. Here are some of those clever life hacks from the past that may be surprisingly useful today.

#1. How to extract a splinter.

Splinters are absolutely the worst. The tiny specks can get under your fingernails and even accidentally stepping on one can be painful and hard to remove. In order to remove one, we have to run looking for a tweezer. But what if you don’t have a tweezer at your disposal? Our ancestors used to follow this simple trick to get rid of dreadful splinters. Though the trick isn’t proven to work 100% of the time, it’s still amazing and handy to know. 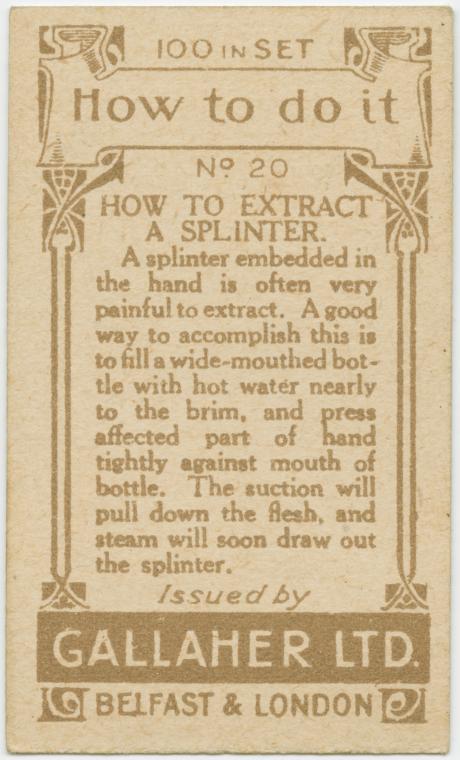 #2. How to cut fresh bread into thin slices. 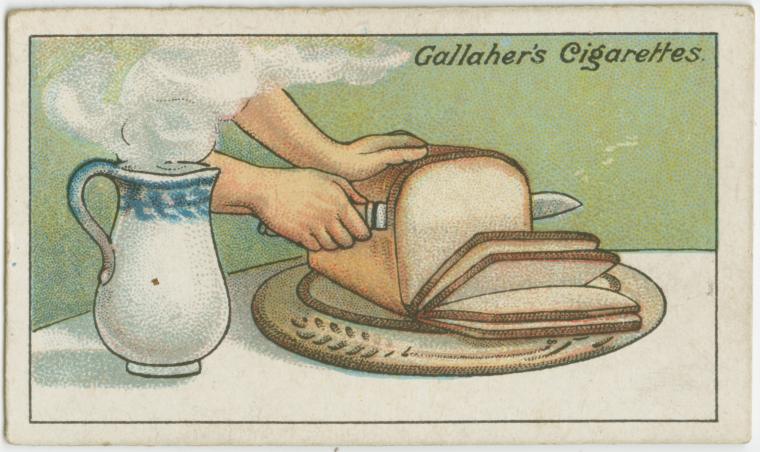 It is always a huge hassle to cut fresh bread into thin slices. The effort leaves uneven shaped loaves along with a huge trail of crumbs everywhere. In case you were at a family gathering and wanted to show your special skills, this life hack might come in handy. 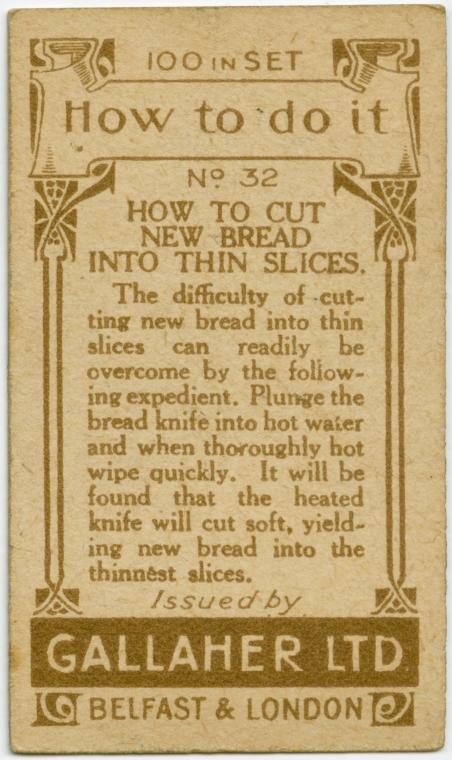 #3. How to separate glass tumblers.

If you are someone who does dishes often, like me, then you will be familiar with glass tumblers sticking together. The situation can become a huge mess if the tumblers break when we try to separate them. The simple trick involving hot and cold water will resolve this issue in a matter of seconds.

#4. How to revive cut flowers.

Today, shopping online is a popular trend. Be it clothes, food or even flowers, everything can be delivered at our doorstep with just a few clicks. Ordering flowers online, however, is not always an easy task. Sometimes, the flowers may fade during transit. You might be buying them to cheer up a loved one or to let someone know that you are thinking about them. Whatever the reason, getting a wilted set of flowers could actually cause the opposite reaction intended. It could even be downright depressing. In order to correct the fading, the trick involves dipping the stem into hot water and leaving it to cool. Once cooled, remove the flowers and cut the end of the stems. Then place the revived flowers in cold water as usual.

#5. How to make a fire extinguisher.

Since 2010-2014, the U.S. fire departments have responded to an estimated average of 358,300 home structure fires per year. Not everyone has a fire extinguisher at their disposal nor is every house equipped with one. The trick that appeared in the Gallaher’s Cigarettes box almost 100 years ago might help you in an emergency situation. It’s always best to leave fighting fires to the experts and let’s hope that we never have to test this trick out!

Article continued on the next page.

Pages: 1 2 3
Previous Onfim: A 7-Year-Old Boy Who Preserved His 700-Year-Old Homework On Birch Bark
Next 10 Extinct Animals That Are Lost To Humanity But Are Preserved In Photographs

Who doesn’t love dolphins? Not only are they adorable, but they are also extremely friendly …