Believe it or not, the United States alone has close to a million restaurants, and the industry is worth more than $863 billion. Since eating out is a common practice in the US, the industry is growing steadily. While most of us believe that restaurants give us proportions worth more than the money we offer them, the truth is that they use several tricks to make their business profitable. Some restaurants or fast food chains even take extreme measures, using illusions and other tactics to make their food more presentable and to ultimately make the customer pay more. Here, we are listing some of the tricks that restaurants use on you to make you spend more than you should.

1. The Delboeuf illusion, which makes it look like there’s more food than there actually is. The Delboeuf illusion is a trick restaurants use to make the serving size appear larger than it usually is. Belgian philosopher Franz Joseph Delboeuf documented the optical illusion in the 1860’s, and since the early 2000’s, restaurants have been using the technique to reduce food wastage as well as to increase profit. Basically, some restaurants offer their dishes in large plates, thus making it appear as if the dish was larger than its size. The same technique is used by restaurants that offer buffet lunches, where smaller plates are provided for the customers. This gives the illusion that there is more food than there actually is, tricking our brains into eating less food. (source)

We often consider foods that are visually appealing to also taste better. By simply alternating the way food is presented to us, restaurants are capable of changing our perception. Apart from that, most restaurants embed some form of artwork with the food, which gives the illusion that the food is more sophisticated and appealing. By doing so, not only can restaurants make us believe that the food tastes better, but they can also charge us three times its price. (source)

Not all restaurants follow this technique but some do. According to chefs, restaurant employees, and others, restaurants sometimes recycle unused bread. This does not mean that the bread was ever served to a customer or that the bread was leftover from someone’s plate. If it was served to someone, whether they touched it or not, any leftover is thrown away. Restaurants usually have more unused bread at the end of the night and some find innovative ways to repurpose it. For instance, some restaurants turn the bread into croutons, breadcrumbs or even bread pudding, and serve it the next day. (source)

4. Advertising high priced items in the front, or highlighting them in some way so that customers would focus on them instead of others. 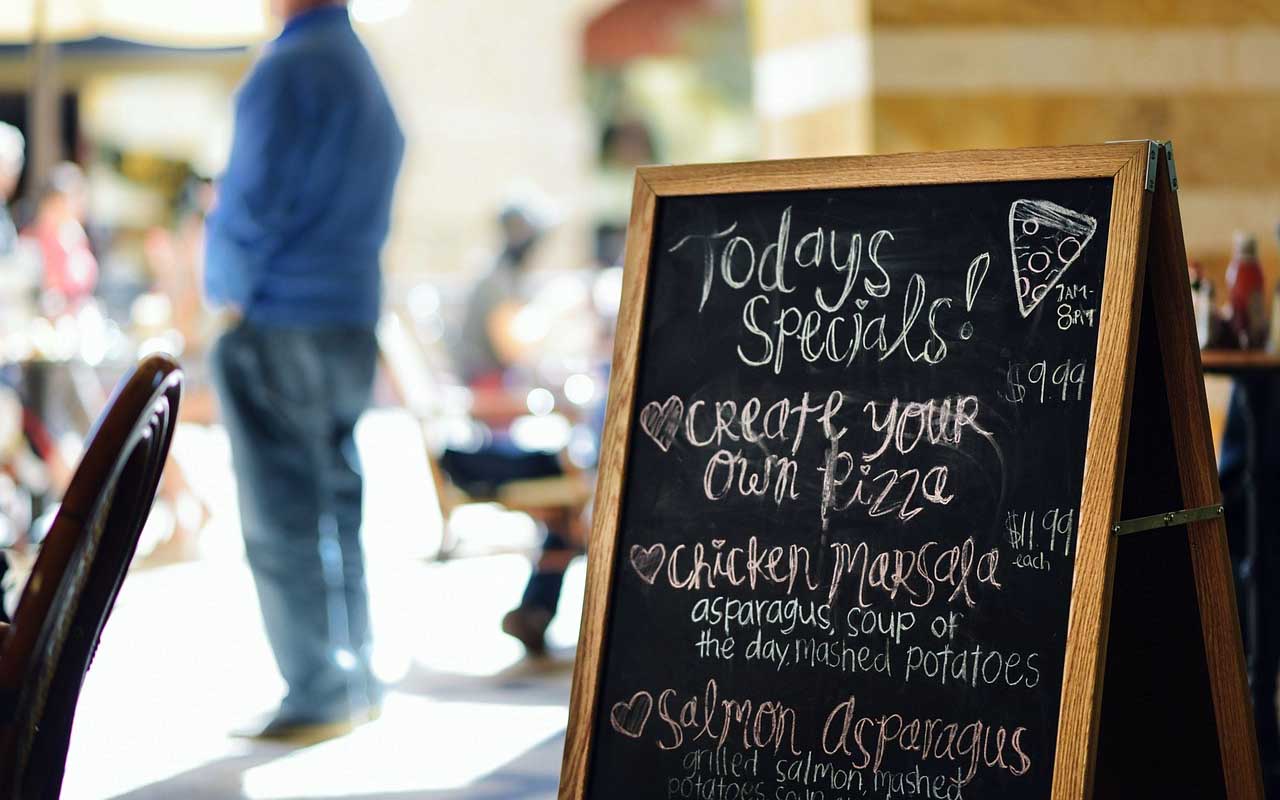 When a restaurant wants to focus on selling specific items, they highlight the products anywhere they can. For instance, as soon as you walk in, the first thing you will notice is the “special of the day” and think to yourself, “that sounds really good”. Even though you may be walking into a restaurant with something specific in your mind, these boards are capable of making you change your choice. Another trick they use is highlighting items with a lot of negative space. For instance, pricier items might have outlines or boxes around them. These design tactics naturally attract you towards ordering what the restaurant intends to sell, not what you intend to eat. (source)

5. Placing decoy items next to others to make your options look like a bargain.

Believe it or not, some restaurants that sell baked products place decoy items to alter your choice. By placing an expensive decoy item next to others, you might find that almond filled croissant to be a great bargain, thus increasing the sales. Another trick they use is the choice of words. Words can have an enormous impact on how a customer perceives a dining experience. So, the dessert section might have some fancy words such as “Velvet Chocolate Cake”. By renaming chocolate cake to “Velvet Chocolate Cake”, your desire to buy the product automatically increases. Adjectives like “farm-raised”, or “locally-sourced”, can attract customers and also help increase the perception of quality of the item. (source)

6. They make you feel nostalgic.

We often have that one restaurant or a meal that takes us down memory lane. Restaurant owners know this pretty well and they tend to use it to their advantage. By embedding nostalgic colors within the restaurant, or keeping up the appearance can trigger happy memories of family, tradition, and childhood. According to one study, “customers sometimes like the feeling of tasting something wholesome and traditional because ‘They sure don’t make ‘em like they used to’”. “Food memories are more sensory than other memories in that they really involve all five senses. So, when you’re that thoroughly engaged with the stimulus, it has a more powerful effect,” explains Susan Whitborne, professor of psychological and brain sciences at the University of Massachusetts. (source)

7. They play with your eyes.

Just like supermarkets, restaurants have their way of playing tricks on you. For instance, when you are handed the menu, and you take a glance at it, the profitable items are always at eye level. This means that the first thing you see are the products they want to sell. The upper right is where an average person would focus first, so profitable dishes are placed there. The appetizers are placed on the upper left whereas the salads are right underneath them. The menu’s are also designed in such a way that the viewer never takes their eyes off until a decision is made. (source)

8. They manipulate prices and one such practice includes removing dollar signs from the menu.

One way to make you spend more is to make the menu as inconspicuous as possible. This includes removing the dollar sign from the menu. By doing so, a customer is more likely to purchase higher priced products since a meal that is worth $12.o0 will either be shown as 12.00 or simply 12. Studies show that the trick works on customers since it simplifies the expensiveness. Experts say that by changing a price tag from $10 to $9.99, it becomes friendlier and people are more prone to choosing the product. (source)

Even though we don’t pay much attention to the music being played in the background of most restaurants, studies show that they have a huge influence on our mood. For example, classical music relaxes people, creating a positive vibe and making them want to spend more time at an establishment. This increases the chances of one placing more orders. Studies also show that the volume of music also matters. When music is played loudly, it increases consumption of beverages, according to studies conducted in French restaurants by Professor Nicolas Guegen and colleagues. (source)

10. They have secret serving sizes.

Many restaurants have their own specialized serving sizes and they keep it a secret. In fact, when they offer a half or lunch-sized portion, they intentionally leave the menu as vague as possible. Apart from that, half-size portions are also marked up slightly, so that the customer feels as if the full portion would be worth the value. (source)