North Korea has always managed to grab our attention with their controversial way of life. The country ruled by despot leader Kim Jong-un portrays itself as self-sufficient, prosperous and well-governed; but the truth is far from reality. The citizens are oppressed and forced to follow strict laws. In order to show the truth about life in North Korea, two photographers risked everything. Michał Huniewicz, a photographer and software developer based in London and Eric Lafforgue, a French photographer, visited the country in 2015. While there, they managed to evade their tour guide’s watchful eye to take these photographs; giving us a unique glimpse into North Koreans’ everyday lives.

1. Mr. Huniewicz went to North Korea from China. He arrived at Pyongyang, where he was greeted by his watchful tour guide. 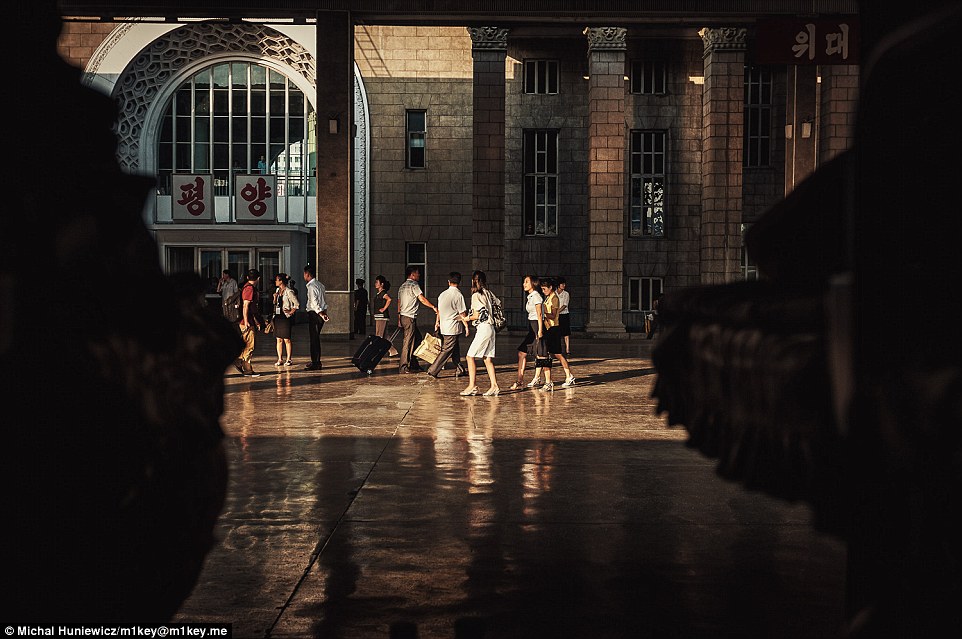 Every foreigner that arrives in North Korea is assigned a tour guide – one of the conditions of being allowed a visit. The guide will stay with them at all times to monitor their activity and to stop them from traveling to restricted places. The image above shows the scene upon Mr. Huniewicz’s arrival. The neatly dressed men and women appear to be walking in a hurry as if they are late for work. The truth, however, is that these people are all part of an act. According to Mr. Huniewicz, the train he arrived on was the only train that day.

2. Street cleaners sweeping up even the tiniest speck in one of the parks in the capital city, Pyongyang. 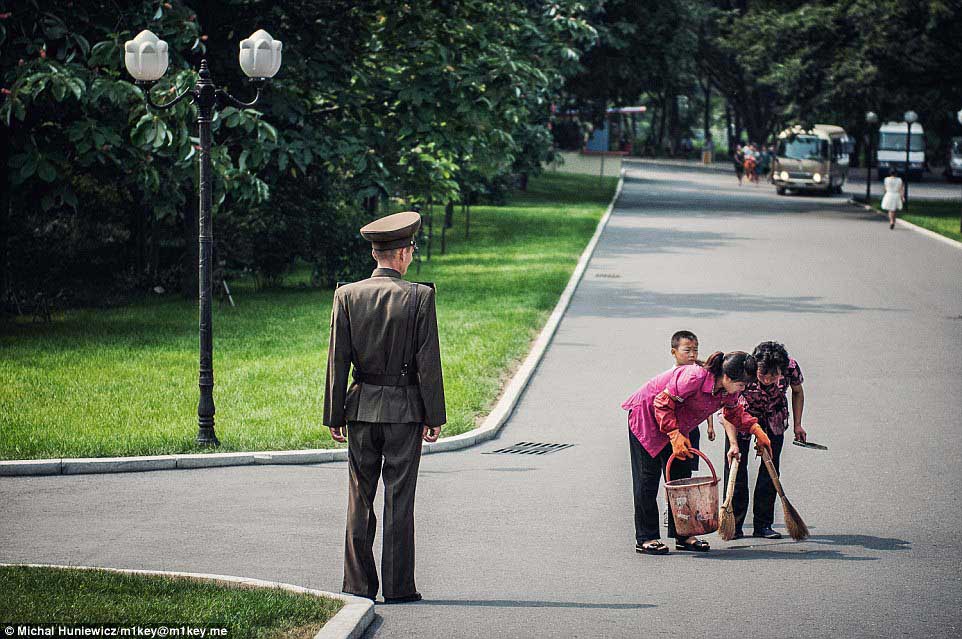 The officials make sure that the locations visitors are allowed to travel are spotless. In the above image that was taken at one of the parks in the capital city, Pyongyang, a soldier can be seen monitoring the street cleaners to ensure perfection. 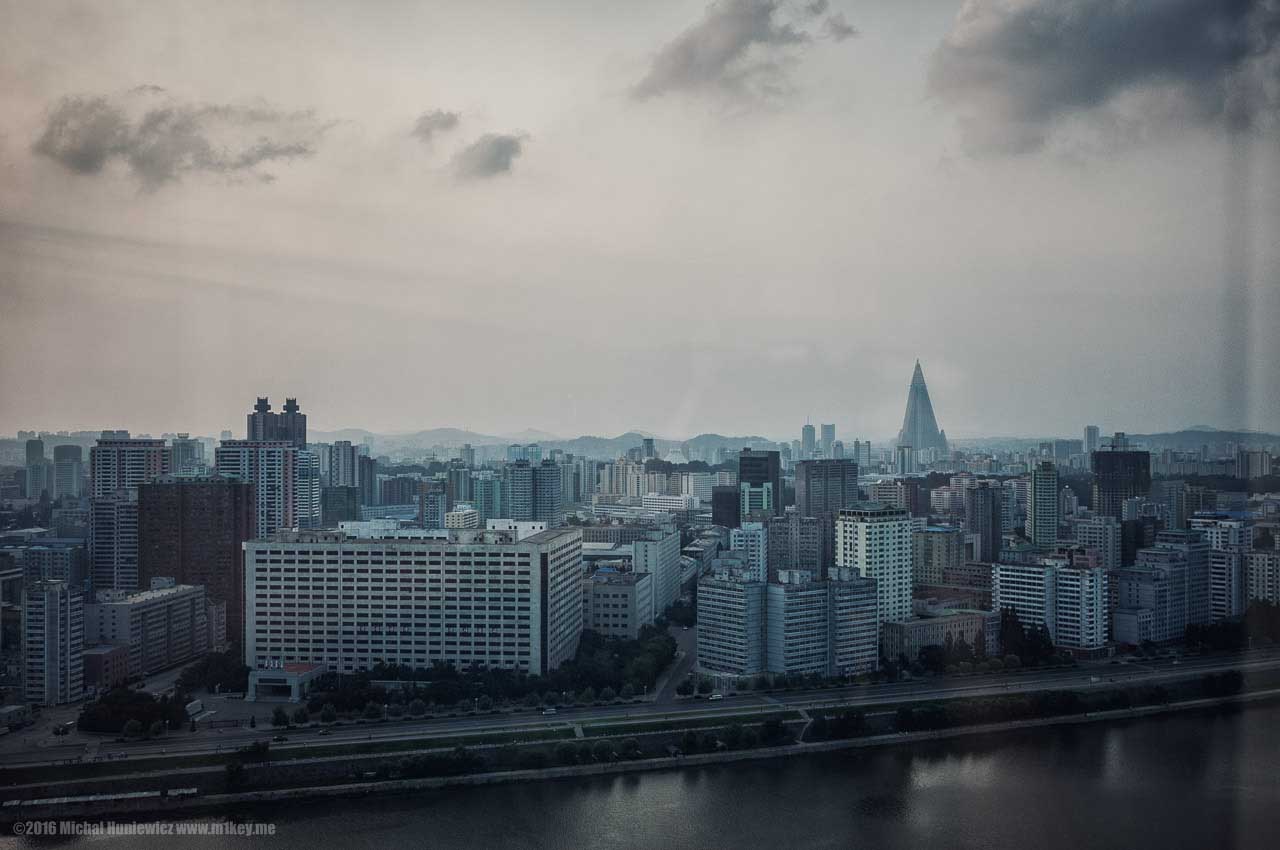 The Yanggakdo Hotel accommodates all non-Chinese tourists. Located in the heart of the city, all non-Chinese people are forced to stay here. Meanwhile, Chinese citizens visiting the city have the right to choose the hotel they desire, as well as walk around the block on their own without a guide counting each of their steps.Crossing the streets are officially prohibited in Pyongyang, unless the guide allows it. 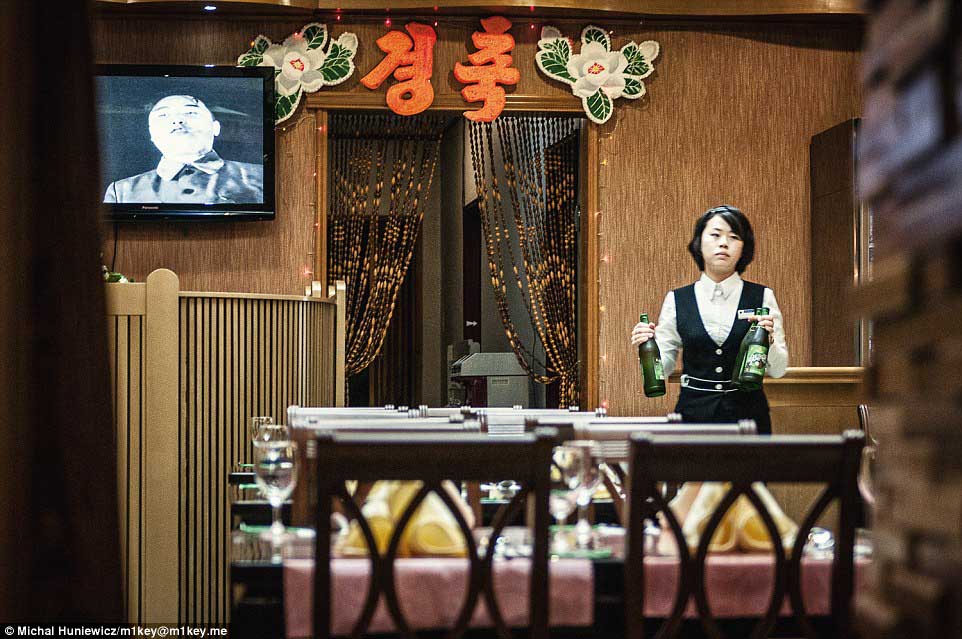 Mr. Huniewicz describes his encounter with a waitress in a restaurant in North Korea. According to him, she looked terrified and spoke very little. The tourists were sent to the basement of the hotel, a small room where they all dined together. Mr. Huniewicz and other tourists that were in the same room were afraid to speak or say anything, since they were unsure as to whether the room was bugged. Also, the TV that can be seen on the left corner repeatedly plays propaganda videos.

5. Guides only tour through parts of the city that are well maintained. 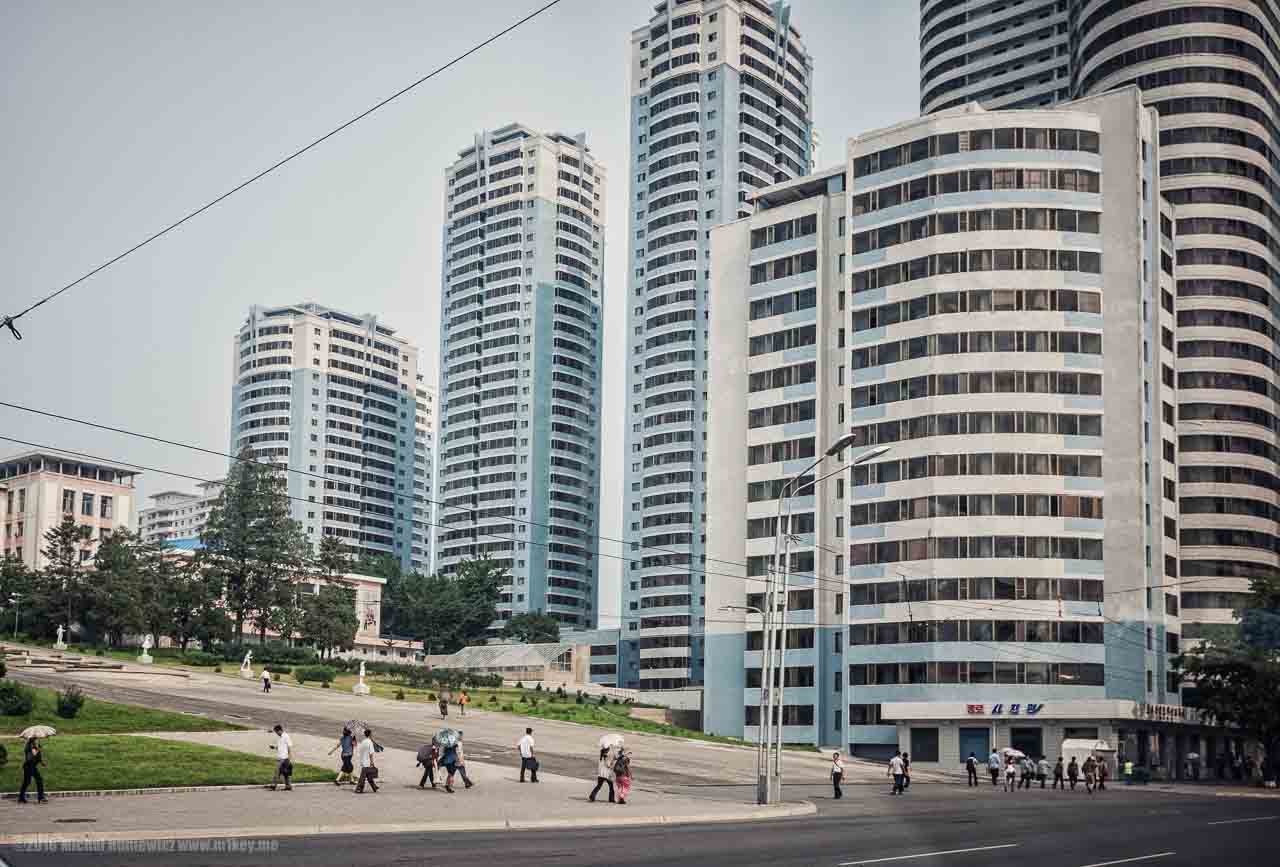 The tour guides only take tourists through parts of the city where buildings are completed and appearance is maintained. Mr. Huniewicz describes that he was taken to this particular location more than once through a different route.

6. Children are also forced to do work in the city. 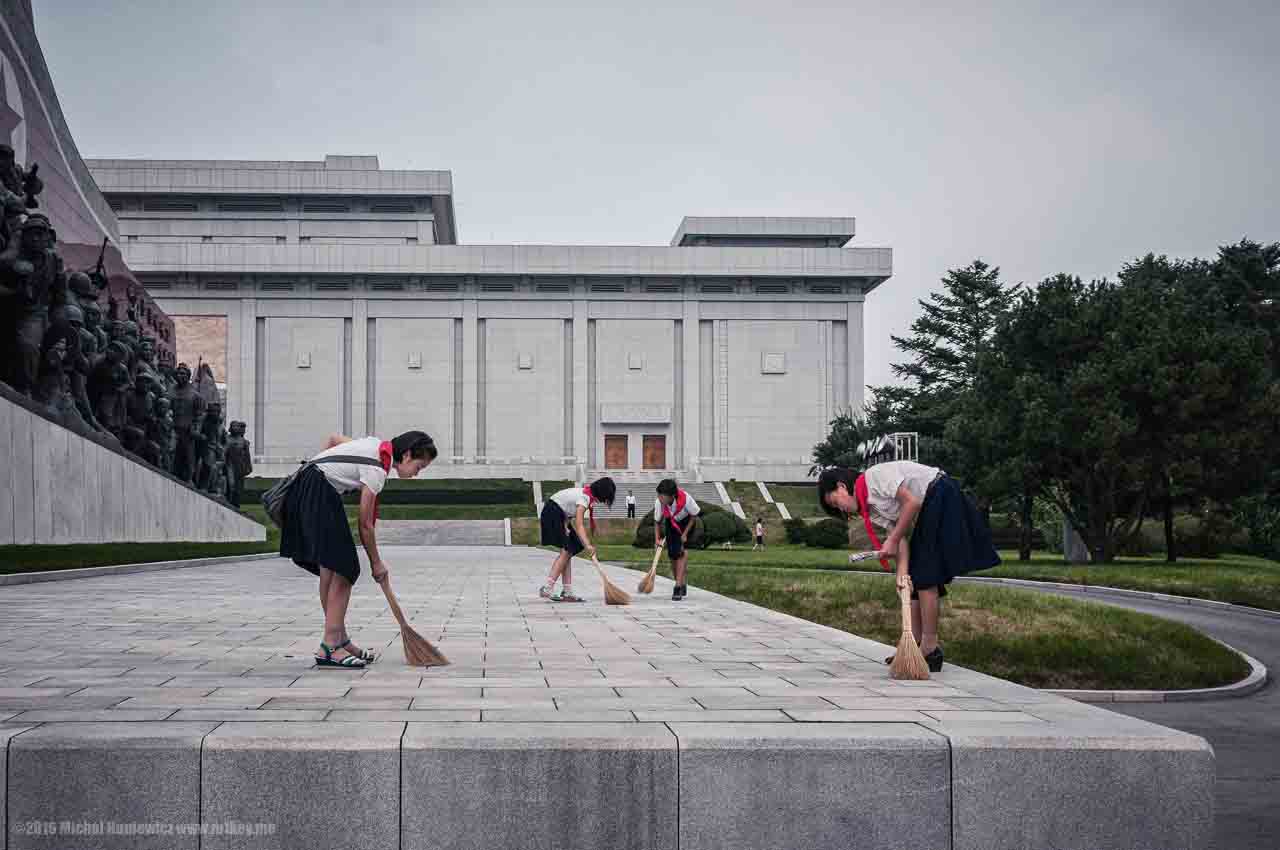 North Korea takes the phrase “age is just a number” literally. No matter the age, every citizen has to pay their debt in one way or another. Also, the statue on the left features a North Korean soldier stepping on an American flag.

Students are forced to work in winter also, where they must handle metal rods without gloves; which sometimes means ripping skin from one’s hands. Although they were forced into hard labor, the children would never complain, because the punishment for complaining is to stick one’s tongue to a freezing piece of metal.

7. Grocery stores that tourists are not allowed to visit shows a different perspective of life. 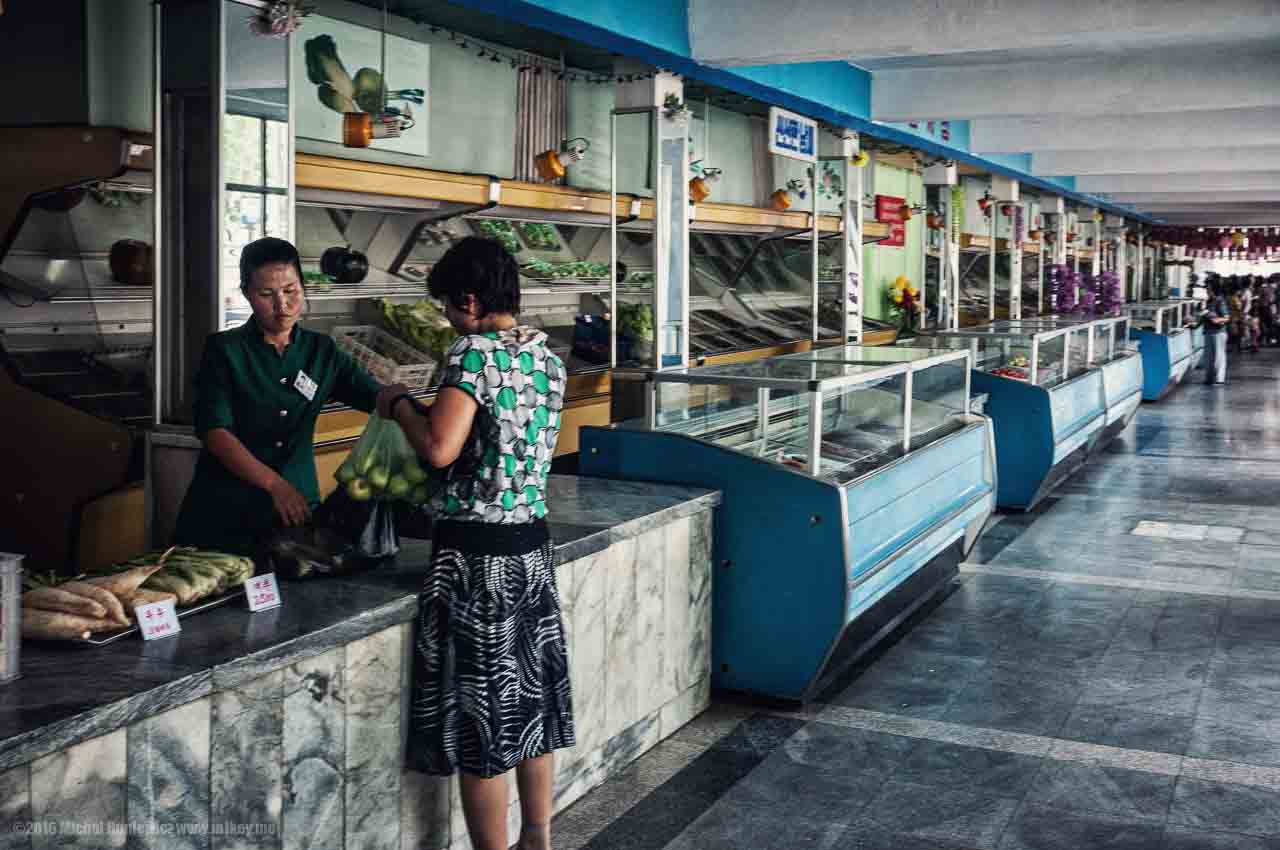 Kim Jong-un portrays the country as being well fed and well maintained but the above image shows an ordinary shop for North Koreans. Most of the shelves are empty and there is little to no food. According to Mr. Huniewicz,

Usually, we were accompanied by our guides, one in the front, one in the back. But at one point they were both in the front, which allowed for a literally 15-second long detour into this ordinary shop for North Koreans. That gave me maybe 10 seconds to take this, before being kicked out by a bad cop, and the atmosphere became rather unpleasant. I’m not sure if he saw me taking this picture.

8. The roads are almost empty since the locals are forbidden from owning cars.

In North Korea, only elected officials are allowed to have cars. Locals, on the other hand, have to rely on bicycles, trams or buses for transportation. Because of this law, most of Pyongyang’s roads are empty and children can be seen wandering around or playing in the middle of the streets.

9. A man uses a river to bathe in public.

Although visitors are banned from taking pictures of North Korean citizens that are not well-dressed, Mr. Huniewicz managed to capture an image that shows a man using a river as a form or refreshment. If the guides see that a visitor is capturing anything forbidden, they would immediately ask them to delete it or even take their cameras away.

According to the UN, millions of children in North Korea suffer from malnutrition. A third of the children under the age of five show signs of stunted development due to food scarcity. They also lack basic needs, medicine and healthcare that is required for their development.

According to the North Korean law, any visitor/tourist is forbidden from taking pictures of malnourished people or poverty. The North Korean news media filters out such images and represents the country as the best in the world.
Pages: 1 2
Previous Boxed In: Life Inside The Suffocating & Miserable Coffin Homes of Hong Kong
Next Carl Tanzler: The Morbid Story Of A Man And His Unnatural Relationship With A Corpse

10 Germiest Household Items That Can Become Your Worst Enemies

With everything going on, most of us have been cleaning our homes like never before. …