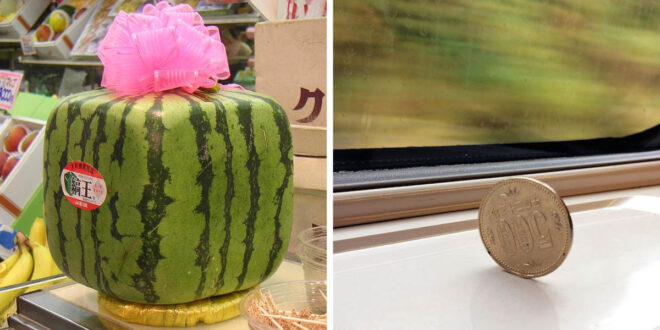 Japan is an archipelago, or string of islands, on the eastern edge of Asia. While the country is known for its advances in science, and tall buildings, almost four-fifths of Japan is covered with mountains. The Japanese people have a deep affection for nature, animals and dedication to work. Although you might know Japan as the home of anime, sumo wrestlers, cherry blossoms and Mt. Fuji, there are a lot more that you are not aware of. Here are some things about Japanese culture and why it’s unlike any other country in the world.

1. The note in Japanese says, “I accidentally knocked over your bike and broke the bell. I am very sorry”.

2. This is how smooth the bullet train is in Japan.

3. “I dropped my shopping bag on the streets of Osaka and when I went back to look for it later that day, someone had placed it next to a tree, untouched”.

4. Drainage canals in Japan are so clean that they even have koi fish living in them.

5. Japanese toilets often have a button that plays white noise/water sounds so you can do your business without other people listening.

6. This toilet in Japan has a system of occupied/vacant toilets information.

7. This shopping center in Japan has free refrigerated lockers for your perishables so you can keep shopping after you get your groceries.

8. This smartphone wiper dispenser in Japan.

9. This bedside lamp at a hotel in Japan can be half lit.

10. Almost everyone in Japan reverse parks.

11. Japanese hotel apologies for one minute internet stoppage at 4am.

12. The elevators in this office building haa an umbrella sign that lights up if it’s raining outside (Osaka, Japan)

13. This Japanese taxi has a button to request slower speeds.

15. In Japan they sell square watermelons to ft better in the refrigerator.

The square watermelons however, can cost around 10,000 yen, which is the equivalent of about $82.