Who doesn’t love dolphins? Not only are they adorable, but they are also extremely friendly with humans. The sea creatures have been roaming our oceans for more than five million years and everyday, we are learning new and interesting things about these mammals. From listening with their mouths to remembering names for decades, here are some fun facts about dolphins that will make you love them even more. 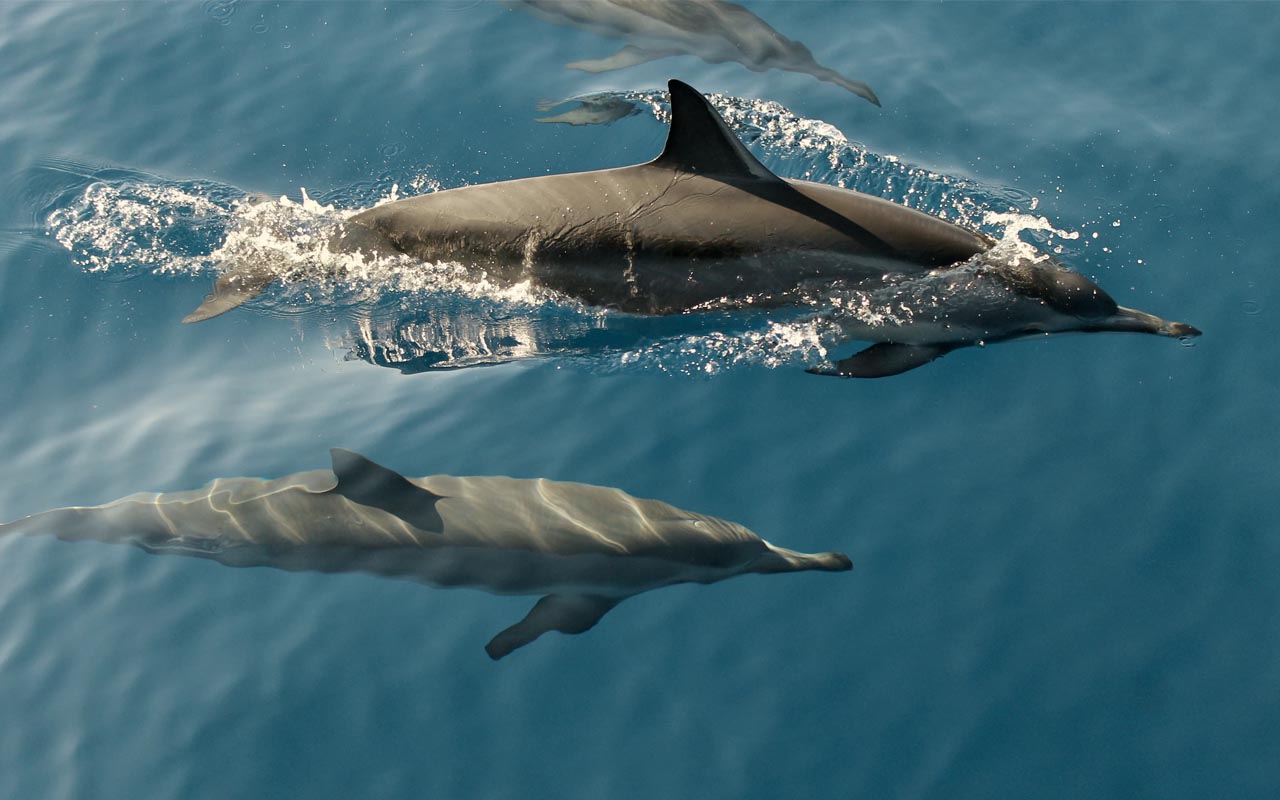 When it comes to being fast and efficient swimmers, dolphins are on top of the list. A dolphin’s body is shaped like a tube that is pointed at both ends. Apart from that, a dolphin’s skin is smooth and feels rubbery. Not only is it 15 to 20 times thicker than the epidermis of humans, it also helps reduce drag, allowing a dolphin to swim fast underwater. In order to swim as efficiently as possible, they constantly replace old skin cells with new ones. A bottlenose dolphin’s outermost skin layer may be replaced every 2 hours.

2. They literally sleep with one eye open.

Unlike humans, dolphins sleep in a very different way. While humans are unaware of their surroundings, have prolonged periods of unconscious sleep, and a breathing reflex, dolphins cannot sleep this way. They have to remain conscious – at least partially – because their breathing is not automatic. To put things simple, dolphins decide when to breathe and even when they are sleeping, they have to continue the process in order to survive. They also have to keep an eye out for predators in the ocean, so for these two reasons, they sleep with one part of their brain working and one eye open.

According to the Whale and Dolphin Conservation, the left eye will be closed when the right half of the brain sleeps, and vice versa. This type of sleep is known as unihemispheric sleep, as only one brain hemisphere sleeps at a time.

3. They can actually speak to one another.

Dolphins communicate with each other through a wide range of sounds and nonverbal gestures. According to scientists, each individual dolphin has a distinctive high-pitched whistle, called a signature whistle. The signature whistle appears to serve as a means of individual identification, much like a name. Studies also show that the whistles contain “information about the location, motivational state, and identity of the whistler”. In a study conducted in Florida, scientists discovered that when two dolphins were cooperating to complete a task, the frequency of their whistles leapt. In other words, they were “talking” to each other in order to solve a complex problem.

4. They also have the longest memories of any animal.

For long, it was believed that elephants have the longest memories of all animals. Scientists however discovered that among non-humans, dolphins have the ‘longest social memory’. According to US scientists, even after 20 years of separation, dolphins were able to recall the whistles of former companions. The research, which was published in the Proceedings of the Royal Society B, proved that bottlenose dolphins can remember the whistles of other dolphins that they lived apart from for two decades. While elephants and primates both have incredible memories, it’s nowhere close to the dolphin.

5. Mother dolphins sing to their babies in the womb.

Dolphin moms are just like human moms. They sing to their little ones while they are still in the womb. New studies show that dolphin mothers teach their babies the “signature whistle” right before birth and in the two weeks after. Once born, the calves eventually develop their own signature whistle.

6. They can recognize themselves in mirrors.

Usually when animals observe themselves in a mirror, they ignore it or become aggressive. Dolphins however, are capable of recognizing that it is in fact a reflection of themselves and not another dolphin that is staring at them. A 2001 study at the New York Aquarium found that when researchers installed mirrors in the tank of a pair of bottlenose dolphins, and marked each dolphin with temporary ink, they stared in the mirror. “Our findings show that self-recognition may be based on a different neurological substrate in dolphins,” the researchers concluded.

Our eyes move in a coordinated manner, which means that when we look from one thing to another, both our eyes move and focus on the same subject. Meanwhile dolphins’ eyes operate independently from one another. This means that they are capable of focusing on multiple subjects to get a better view of what’s happening around them. Since their eyes are located on the sides of their head, a dolphin is capable of observing what’s happening around and even behind them as they swim through the ocean.

8. Some can jump as high as 15 feet high and can go over 20 miles per hour when they work hard.

According to the Wild Dolphin Foundation, dolphins have been observed jumping as high as as 15 feet. Researchers say that dolphins prefer jumping rather than swimming. Air is less dense than the water so jumping allows them to conserve energy. While dolphins typically swim at speeds of 2-3 mph, if they really work hard, they can travel at speeds of 20 mph.

9. They are also known to live in rivers.

When you think of a dolphin, you would automatically think of the ocean as their home but apparently, there are seven species of dolphin that prefer rivers instead of the salty water. These include the Amazon river dolphin, the South American tucuxi, Ganges river dolphin and the Irrawaddy dolphin.

Not only are baby dolphins born tail first, momma dolphins break the umbilical cord by swimming away fast and making a rapid U-turn. They then hurry back to the baby dolphin and escort it to the surface so it can take a breath. Dolphins are marine mammals, which means that they need oxygen from the air to breathe. Fish, unlike dolphins, have gills that take the oxygen from the water. Dolphins instead have a blowhole on top of their head and are capable of holding their breath for up to 15 minutes.

Previous 20+ Fun Facts That’ll Make Everyone You Know Say “I Never Knew That!”
Next 18 Random Facts About Things You Never Knew Of