The shower isn’t just a place to sing, but is also a place where we indulge ourselves in deep thoughts. Separated from technology and standing under running water often allows our minds to run free. We have all been there and some of us love being there.

It makes us deep thinkers and sometimes allows us to reflect on our lives. Whether you have these thoughts in the shower, or when you are laying in bed when you just can’t sleep, the location is irrelevant. Here, we are listing 21 shower thoughts for your amusement.

2. If you could take a second of life from everyone on Earth, you would survive for nearly 240 years.

The current world population is 7.7 billion as of September 2019, according to the most recent United Nations estimates elaborated by Worldometers. This means that if you could take just a second from every one of those 7.7 billion people, you would be able to survive for nearly 240 years.

3. People say life is short, even though it is literally the longest thing we will ever experience.

4. Two people can be born at the same exact time but because of time zones, have different birthdays or even be born in different years.

5. What if Santa Claus is actually real and our parents just give us presents to hide the fact that we are on the naughty list?

6. Maybe there is no reason as to why we are here. Maybe we are just characters in a universe-sized video game. Sleep could be a save point, which is why we have no clue as to what will happen from the second we fall asleep until the moment we regain consciousness.

8. We have eyes to see, a nose to smell, ears to hear, hands to feel, and a mouth to taste. Could this be all the senses there is? What if we are missing some part of reality because we don’t have the organ to detect it?

9. People see glasses as a sign of intelligence, even though we had to fail a test in order to get them.

10. Your shadow is a confirmation that light has traveled nearly 93 million miles unobstructed, only to be deprived of reaching the ground in the final few feet… thanks to you.

11. If you’re no longer covered by your parent’s health insurance, your manufacturer’s warranty is over.

12. Antarctica is probably the smartest and most educated continent on Earth, considering it is populated almost exclusively by scientists.

13. The brain is the only organ that knows it’s actually an organ. Apart from that, it basically named itself.

14. When you go to a restaurant and you wait for the waiter, you become the waiter.

17. At the same time, taxes are like a subscription fee to your country. Unlike other subscriptions, you just don’t have the option to cancel; even if you don’t like the service!

18. Every single person alive was at one point the youngest person in the entire world. Similarly, for a very brief second, every 19 year old is the oldest teenager in the world.

19. You have never truly seen your own face before. You have only seen it in pictures or reflections.

20. The rich used to pay the poor for entertainment, whereas today, the poor pay the rich to be entertained.

21. Sometimes, in order to fall asleep, you have to pretend to be asleep.

Previous Top 10 Things Food Safety Experts Would Never, Ever Eat
Next 55 Facts That Will Make You Say “I Had No Idea”

10 Absurd Facts That Are Sure to Surprise You

55 Facts That Will Make You Say “I Had No Idea” 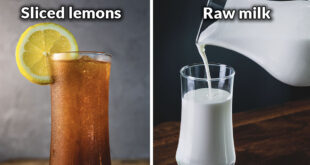 In this fast moving world, we often find ourselves with very limited time to spend …